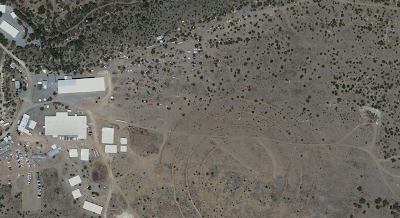 Yogi Bhajan’s real name was Harbhajan Singh Puri. He named the solstice site Ram Das Puri back in the late 70’s. I guess he named it after himself and no one noticed or cared?

Isn’t Puri just a tribal name? Doesn’t really translate to anything having to do with the 4th Patron Saint of Sikhism, Guru Ram Das… who was born with the surname Sodhi, according to wiki.

On the far, middle right of the picture is a small, bare area. That is where they held firearms training. The spiral pathway is for the ritual peace walk, where, IMHO they trotted out some local Indians to make up some chants so that a bunch of new-agers could feel like they were participating in an authentic tribal ritual.

The claim is that this was sacred Hopi land, and Puri was their so-called “white-clad warrior” (wikipedia, just look at the citation source to clear up any confusion). Prior to it being 3HO owned property, it was actually inexpensive ranch land.

Geography alone would indicate that any pre-columbian inhabitants of the land would have belonged to a different Pueblo tribe, the closest ones being the San Juan or Santa Clara Pueblo. Not sure what they think about all these white freaks stealing their land.