Firearms training, and exposure to firearms were normal growing up in 3HO Sikh Dharma. My parents owned two or three handguns and a rifle. Even as a young child I knew where they were stored – inside their bedroom closet, loaded, and inside a padded, brown leather holster. Yogi Bhajan had a 24-7 cadre of armed security guards that were always within arms reach of him.  These guards were mostly men, albeit some very young and inexperienced “men”, and there was one woman, named Shanti. These guards openly declared that they were willing to give their lives to ensure his safety.

Every summer the young children (as young as four or five years) lived in tents at Ram Das Puri for 8 weeks of children’s camp. Our mothers were “down the hill”, undergoing a different kind of indoctrination, a militarized retreat called Khalsa Women’s Training Camp. Handgun and Rifle target practice, however, occurred at about 1000 yards’ distance from our children’s camp. Women from KWTC rode up in orange school-busses. When us children saw the busses arrive we were excited and happy, thinking ‘maybe this is when I’ll get to see my Mataji, and she’ll hug me, kiss me, and maybe she’ll even take me home with her’. Alas, the bus never stopped. It drove past us with moms waving, and cheering us, while we cried and begged for it to stop. And while they didn’t appear pained, us children were injured by their deliberate show of “detachment”. 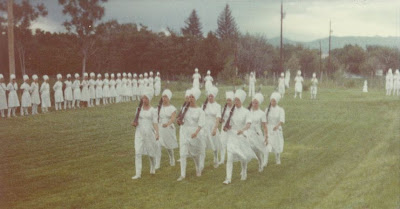 The ladies of KWTC demonstrating their drill routines, c. 1984

KWTC target practice did not come without its glitches. One of those was fatal, in which a man, who was there to assist KWTC women, was the unfortunate victim of a firearm backfire. The bullet exited the rear of the chamber, entered his neck, hit his carotid artery, and, being 8 miles up a dirt road from the hospital, he bled out and perished. He left behind a two-year old son, a boy of my generation.

Although this man was skilled in the use of firearms, there is no predicting when a tool like this will malfunction. And although we were raised with a certain “respect” for the instrument, we began our own firearms training between the ages of 12 and 16. I shot my first handgun, a Glock 9mm, when I was 15.

But how did this group morally justify the use of weapons of this nature? As converts to the Sikh faith, they had adopted the practice of carrying the Kirpan, a harmless little steel dagger. Even so, how does one make the leap from the Kirpan to a 45-caliber semi-automatic handgun?

Yogi Bhajan, the sole authority of 3HO Sikh Dharma, was playing all sides in the ongoing crisis between the Akali Dal, the Indian Government, and the sikh separatist Khalistan movement led by Jarnail Singh Bhindranwale. At the same time, one of his inner circle devotees was attempting to acquire a large supply of major weapons. He was also possessed by a personal desire for power and wealth, so employed a common strategy in cults: the doomsday scenario. He painted this doomsday scenario to be the transition from the Astrological Piscean Age to the next Astrological age, the Aquarian Age. In this transition, which could last several centuries, would be great suffering and strife. He said, “Most people will be crazy. You must master my meditation techniques that will uplift you from the ensuing insanity. But you must also be prapared. You are Warrior-Saints“. A convenient message to the 3HO members – piety without backing down. So they meditated whilst militarizing themselves. They practiced yoga and they practiced shooting guns–at Ram Das Puri, our privately owned, hilltop children’s camp-slash-yoga festival-slash-firing range.

Contrarily, contemporary Indian Sikhs are generally not inclined to militancy. My Sikh classmates at GNFC were not even remotely militant. They came from upper middle class Punjab backgrounds that, for the most part, chose Guru Nanak, the pacifist, as their Patron Saint. And at the same time they, like us, were schooled in the history of militancy in Sikhism from the time of Guru Hargobind (1595-1694) to Guru Gobind Singh (1666-1708), Maharaja Ranjit Singh, etc etc, but while Indian Sikh children are educated, we were indoctrinated, and made to learn and adopt the martial arts and dress of the Nihang sect, a small, male-only class of orthodox and martially inclined Sikhs. 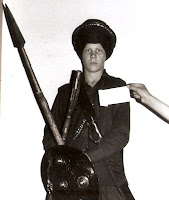 Historically, from the 17th Century to World War II, Sikhs have enjoyed the warrior class status among the changing and evolving structures of India – from the Majarajas, and the Moghul Empire, to fighting alongside, and then against the British Raj. The history of Sikhs (militant or not) in Punjab and in India is fascinating, and deserves broad, mainstream exposure–if only to serve as a meter for all the complexities of modern Indian history. The most alarming chapter, however, took place while I was in India – the rise of the Sikh separatist movement, and the subsequent Operation Blue Star*, which ended in the assassination of Prime Minister Indira Gandhi by her Sikh bodyguards, followed by anti-Sikh rioting, war, and mass bloodshed, and ending in 1989. Thousands of innocent people were massacred as a result of the clash between Indian government and a few self-righteous, agenda-driven ideologues.

Notwithstanding, there’s no logical conclusion to make regarding any connection of traditional Sikhism, and it’s proud military history to Western Anglo Sikh converts and handgun ownership. Perhaps it’s an ideology that conveniently fits with a self-serving and paranoid “all-American” desire to exercise their 2nd Amendment Right to the fullest, and their fervent attachment to a paternalistic figure like a cult leader.

When I was eighteen I made a resolution to never own or even touch a handgun. A friend carried his Colt 45 with him to a party and left it in my car. As I was coming down from LSD, I held the gun in my hand and experienced a chilling and gripping feeling that this was nothing but an instrument of death. Not protection, not self-defense. Death. Hate. Fear. Paranoia. Destruction. I wanted no part of it.

I am grateful for LSD for providing me with this outside intervention. The substance itself became a catalyst for open-mindedness and my eventual path toward tolerance and acceptance. Through this I not only experienced the feeling of turning away from militancy for good, but toward using my creativity and intellect as a force far more effective than any weapon could offer. Then and there I knew I was better than the gun-toters.

My heart goes out to the Sikhs in Wisconsin. You might think this white lady doesn’t know you, but I do. Many of you were my friends when I had no parents or family. I enjoyed your selfless hospitality in your Gurdwaras and Langars, and for that I have fond memories. And while I no longer wish to worship in the temple, I recognize the Sikh immigrant contribution to this country–that goes back to well over a century. I wish you prosperity and happiness in this country or any place that you call home.

*The Wiki link to Operation Blue Star may not be entirely neutral, but you can follow citations to learn more about it.

4 Replies to “The Pen Is Mightier Than The Sword”