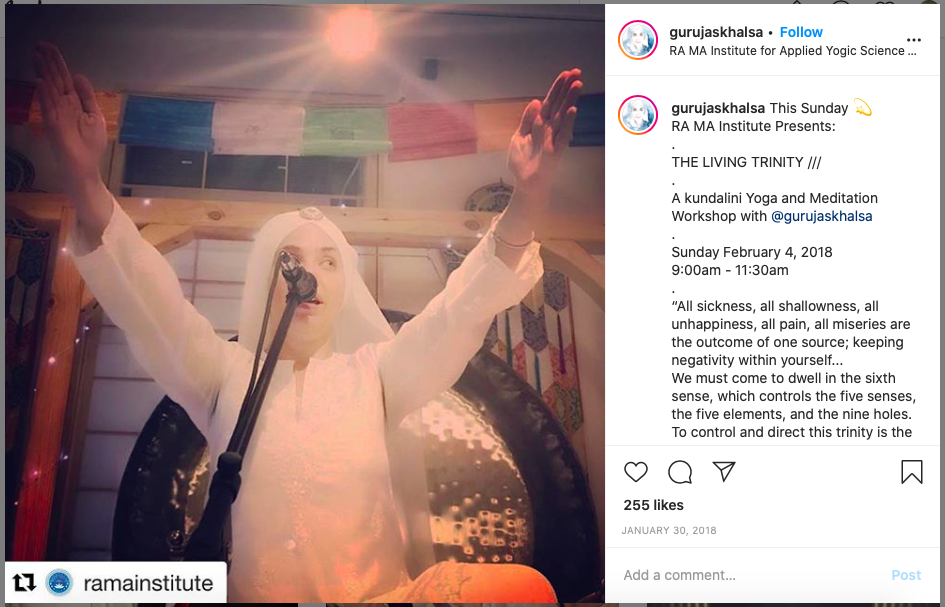 Um, your boy is a dud.  And all you’re doing is trying to capitalize on this dude’s name and image. And you have no idea what you’re saying.

The below excerpt is from a draft in 2018. I decided to go ahead and publish it because I think it’s funny. It’s now 2020 and stupid people are still arguing whether Yogi Bhajan is for real or not. I’m grabbing my popcorn.

3HO Sikh Dharma and Kundalini Yoga seem to be having a trending moment. Yogi Tea is everywhere. By the way, it tastes disgusting, and its profits get funneled through a giant multi-million dollar private security firm. Kundalini Yoga is hip and cool on Instagram, and I have even seen Yogi Bhajan memes and quotes on my own feed (gross). And what’s alarming is that today there are dozens or maybe even hundreds of individuals – from 1st generation members, to 2nd generation ‘indiakids’, to recent converts – trying to make a brand for themselves under the banner of Kundalini Yoga as Taught by Yogi Bhajan (Registered Trademark).

It’s nothing new, and I really don’t want to write a blog post aimed at taking anyone down. I honestly feel that if these people are so self-absorbed, vain or greedy, they are not worth it.

It’s easy to go on social media and think that these guru wannabe’s like Gurujas or Gurumukh or Guru-whatever – are succeeding with promoting the work of a false prophet and horrible human being. I don’t like seeing that these people have tens of thousands of followers. The only thing that helps me is to remind myself that “followers do not equal real members”, but more likely is reflective of some kind of sycophantic feedback loop.

Today’s Kundalini Yoga woo-woo-ness triggers me in a strong way. It’s eerie enough that what preceeds it is an unquestioned, and artificial version of ancient, valid and very sacred rites from the Pranayama. The Pranayama is a scripture in the Patanjali, which is one of the ancient Vedic scriptures of the Hindu religion.

From what I know (and I’m not much of a Hindu scholar, just saying) Kundalini is a term in the Pranayama, however Kundalini Yoga™ has no basis in this scripture. None. And Yogi Bhajan was not a Yogi. Nor was he a scholar. Of Vedic scriptures. Or of any scripture for that matter. And he wasn’t the “Mahan Tantric”. Because no such title exists.

Yogi Bhajan aka Siri Singh Sahib aka Mahan Tantric aka Siri Singh Sahib Bhai Sahib Harbhajan Singh Khalsa Yogiji is really only one person: Harbhajan Singh Puri. He was born in 1929 near what is now Lahore, Pakistan. He relocated to India after Partition. Then, he went to work as a Customs Official in New Delhi. To the 2nd generation Indiakids – those of us who were sent away to boarding school in India – it’s common knowledge. When I was sent to India in 1983, I innocently assumed our classmates would know who “Siri Singh Sahib” was, because, you know, we were in India. But when we were met with looks of confusion by the Punjabi Sikhs in our school, we kinda figured out that it was bullshit. And the titles he gave to ashram leaders in the U.S. – Singh Sahib and Sardarni Sahib? Those don’t come from traditional Sikh community standards either.

So, if Yogi Bhajan isn’t actually a Yogi, and he didn’t really learn all that stuff from a previous “Mahan Tantric” – who he claimed was a Tibetan Master, and who mysteriously vanished along with all records of his existence once YB arrived in the US… then what is Kundalini Yoga?

A completely invented, knock-off ‘brand’ of fiction and marketing. Period.

But the new wave of Kundalini Yoga gurus are a special kind of awful from where I sit. They have NO clue what WE went through. None. Or, they do and they don’t care. That’s even worse.

The Kundalini Yoga trope conveys a creepy homogeneity. A woman in a flowing white gown and a white cap-like turban and flowing chuni, sitting cross legged on a stage at a microphone, her hands raised in a double heil salute gesture. She is back-lit. Behind her is a large brass gong. She is young. She is pretty. And she is white. Their grammy winning song is titled “White Sun”. 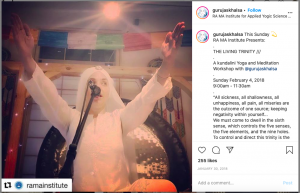 This trope isn’t really new though. It goes all the way back to 1969-1970 when the first group of goras toured India and the Sikh Gurdwaras. During this tour, white women converts heavily pressured the Gurdwara establishment (SGPC) to make exceptions to their gender rules, resulting in a coerced negotiation for (white) women to be allowed a performance of gurubani-kirtan at the Golden Temple. THE Darbar Sahib. Those white women smugly considered it a feminist victory. They did not consider , even for a second, that although got their way, they left a trail of really bad feelings in their wake.

OMG that fucking book title too! What is it… “White Bird in a Golden Cage”.

Just another Sunday for every 9 year old …at the

On our healthcare, the newsletters to parents read

“YOGIJI STATED THAT MEN WERE TO RUN THE CAMP THI

#LizzysInABox but all I can think about is the fac

The hard concrete was the children’s only shelte