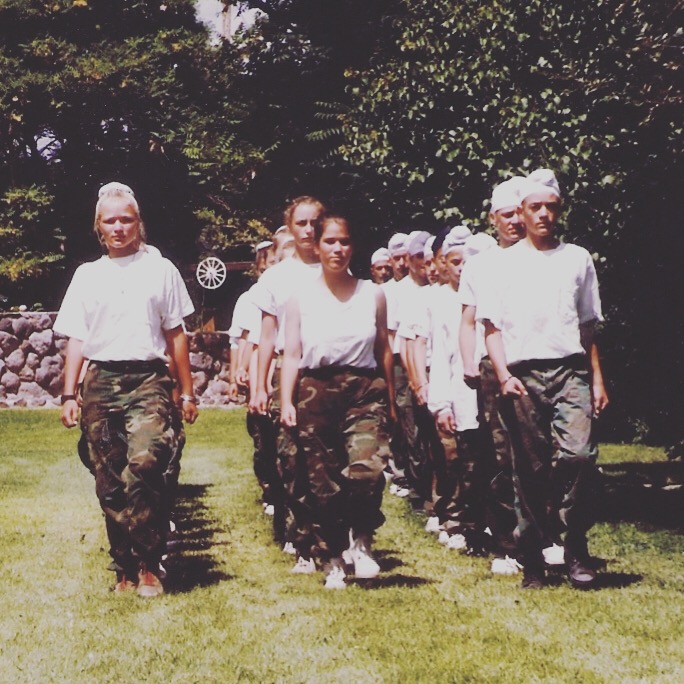 There’s a time in every young adult’s life that they realize their parents are imperfect and fallible. This post is about that – and about my time living in the Española 3HO ashram when I was in my late-teens. It was the early nineties. I had just completed one year at New Mexico Military Institute, but then Yogi Bhajan decided that military school was actually too free a place for us so a lot of parents pulled their kids out.

My mom and dad moved to Española that same year. A ton of bizarre, wack shit went down in that time period. My parents bickered every single day. My mom bailed on my dad every single day to hang out with her sisters and their husbands. My dad bailed on my mom every single day to hang out with rich new-age yoga ladies. Our dog got off-leash while my uncle was walking it. My dad found the dog’s dead body on the side of the highway the next morning. My uncle didn’t take responsibility. My dad started to lose his faith. My mom harped at him constantly (for losing his faith). Dad became totally unavailable. My mom and aunts and uncles confiscated all of our rock n’ roll shirts and tapes and threw them in a dumpster. And–worst of all, crime of the century here–they banned us from going to Clash of the Titans (that’s Anthrax, Megadeth, Slayer and Alice in Chains).

That summer Yogi Bhajan made me check in a the Ranch every day. He’d make me salute him as if he was a general. He told us he was our “Commander in Chief”. He’d order me to do strange and cryptic tasks. One time he told me to spy on his secretary Siri Hari Angleton, and he told me to go through all her papers to see if there was anything suspicious. What the fuck was I supposed to know what was suspicious or not. I was 18. One time he had me report to another secretary Siri Ram Kaur. When I went to her house around lunch time she was still in bed and she had another woman in bed with her. It’s as if they were up all night…

College started in the fall and I attended full-time studying math and physics, catching rides with my other sikh-kid friends. My parents were fighting all the time. My dad moved into the pump house. My mom broke-in to his computer to see if he had a secret stash of money. Yogi Bhajan told my mom to file for divorce. She filed for divorce. Dad left. Mom was happy with it. She got the house. Then Yogi Bhajan coerced my sister to defer her graduate school to stay in Española. How did he coerce her? He told her that if she didn’t stay in Española that my mom would commit suicide.

And just like that, she put her life on hold, and stayed in Española to try and hold the family together. She got a job at LANL. I went to college in Los Alamos. My younger sister went to McCurdy high school. After my first semester at college Yogi Bhajan cornered my mom again. He told her I shouldn’t be going to college. That it was a waste of time. What did she do? She obeyed. She marched me into the Ranch again. Yogi Bhajan berated me for taking computer programming classes. He ordered my mom to stop paying for college so my only option was to go work for the 3HO owned computer fix-it company Sun&Son.

This was one of the most boring jobs. The boss was a grumpy dickhead who was obsessed with aromatherapy. I still can’t handle that fake, smell of lavender EO in a diffuser. It does NOT make me calm. The other boss was more of a ‘fun guy’ and didn’t really do much to help with structure. The other lower-tier IT guy was a lazy good-for-nothing jealous asshole who bossed me around whenever he felt like it. And somehow, every sangat-member felt entitled to order me around too. All I every did was run around fixing not-very-broken computers. I took a ton of abuse from sangat adults–who were always calling me in a fit because they couldn’t figure out how to turn their computer on. Sometimes they’d be in a full rage. I’d literally flip a switch on their power-strip and then walk out. Fuckin’ Idiots.

So after all that talk about having to be in India, and “walking in the footsteps of Guru Gobind Singh” and “building character and strong women” and stuff, it came to this? Mind-numbingly boring, low-wage, borderline abusive corporate drudgery? In this shitty little cult in this shitty little town? Nooooo!

During this phase, I really started to see the behavior of Sangat members for the childish pettiness that is was. But it also felt like we had eyes on us at all times. Nothing we did was good enough. Nothing we did was deserving of support in any way. There was no sense that anyone was trying to help us into adulthood in a genuine way. We were just… suspect. All the time.

Where are you going? Where have you been? What do you think you’re wearing? Where’s your turban?

Oh so-and-so does way better bhangra than her. Oh so-and-so really shouldn’t be singing kirtan at gurdwara, she is so awful. Look at the way she sings, who does she think she is. So-and-so wiggles her butt to get attention. So-and-so is a slut.

It was so draconian and so oppressive, and at the same time the overarching behavior oftentimes verged on jealousy. Yes, they–the very same people who shipped us off all alone to India–were jealous that we spoke better Punjabi than they did, and that we understood Sikhi better than they did. And they wanted us to undo the stuff we’d learn so we’d learn it their way (ie, worship Yogi Bhajan over all else). They were just resentful that we didn’t assimilate they way they wanted us to. I’m really not kidding. They really didn’t like that we felt the right to have freedom. And that we expressed that we had a right to our freedom.

I mean, if Yogi Bhajan had hammered into our psyche that we weren’t supposed to be like our parents, why was he now expecting us to be exact replicas of them?

This only makes sense if you simply acknowledge, yes, this is a cult. This is what cults do. They require high levels of commitment, while changing the rules whenever it suits the ‘mission’.

But we did not assimilate so easily. So Yogi Bhajan started ramping up his attacks–on my family and on anyone else in his vicinity–someone who’s parents decided to ‘fix’ their kid and march them up to his Ranch. He lied about my little sister to my mom and told her that she was a drug dealer and that “the Española police were investigating her”. My mom actually believed him.

Yogi Bhajan tried one last attempt to curtail my individual freedom. This is how he did it: I was marched into the ranch and he screamed all kinds of obscenities at me. And, just like the rest of us girls he said to me, “You’ll wind up a drug addict prostitute lying in the gutter.”

That was it. I cut my hair. I quit my job. Yogi Bhajan told my mom to kick me out, so yep. She kicked me out. Both my sisters left too. We were so outta there.

Look. None of that has gone anywhere. They still judge the young people through this lens of pettiness and jealousy.

I am in my mid-forties now. I am the age that a lot of these boomer sangat members were when I was 18-19. As a middle age woman, I cannot fathom treating a college-age kid in the way they treated me (or us). I’ve taught college. I know how immature young adults are at that stage. You have to fight every urge not to ‘monitor’ or ‘parent’ them, because yeah they are still fragile. But they are also free. Instead you have to gently guide young adults, while supporting them, giving them lots of space, earning trust, and most of all, you as the grown up must demonstrate healthy boundaries.

Today, much of the behavior on display by the boomer sangat members is not much different than their behavior thirty-odd years ago. There’s a self-righteousness that underscores all of it. Even the pettiness. And since the AOB report has been released, that pettiness has turned to open vitriol, DARVO, and bizarre new-age mumbo-jumbo attacks on our souls even. (LOL?)

And, all through this? There’s a 100% sincerity in the belief that they are correct, entitled and owed deference. It’s just astonishing. With everything we know now. Really?

And my parents thoughts on the AOB report? Mom’s a denialist. Dad’s all about it. But also, Dad’s gone full QAnon. So.