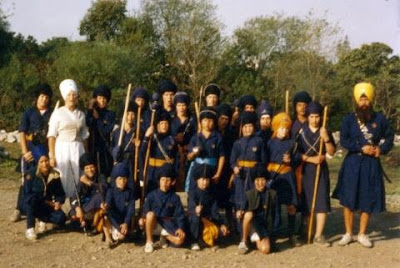 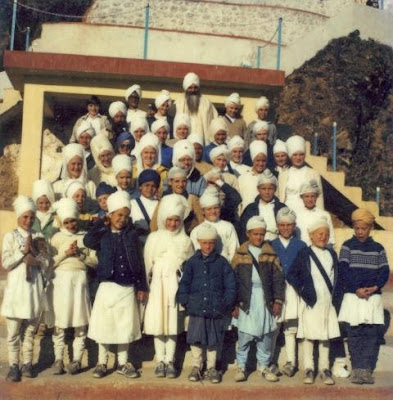 Posing for group photos was agonizing! It always took the photographer forever to set up, and right when he’d get ready he’d say “Ready… Steady… …no hold on…” It was hot, we had be dressed in “bana”, but usually by the time a couple of frames were shot half of us were too loopy to put on “the show”. The top one was taken with Nanak Dev Singh (pictured on the far right in full regalia), and the blue outfits were part of showing off our gatka skills in pretty much every Punjabi town we showed up in. That’s him on the far right. I have some good shots of me as little little kid, where all us little kids had to form a chain circle to stop the massive crowd from encroaching into the performance area. You don’t know what a crowd is until you’ve been to India, much less a parade, or jalous in India.

The good thing is that I think maybe there’s as few as four or five people out of both crowds are still involved in 3HO. Four or five too many, but looks like natural selection will take care of that.